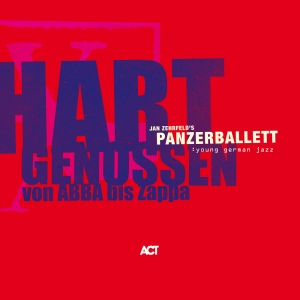 “Faster than Metallica, more powerful than Motörhead, and funnier than Rammstein” – that’s how the prestigious German newspaper DIE WELT described Jan Zehrfeld and his group Panzerballett. With a unique combination of jazz and heavy metal the band deconstructs music genres like few others. Few German recordings have caused such a national and international furore as did Starke Stücke, Panzerballett’s 2008 debut album for ACT. Hart Genossen von ABBA bis Zappa is the stylistic anarchists’ eagerly anticipated second escapade. Musical purists and the “jazz police” will despair, but emancipated listeners will walk away enchanted with smiles on their faces.

The German title is a play on words: The title can alternately be understood as “Tough Comrades” or “Thoroughly Enjoyed”. And indeed, on this new album Jan Zehrfeld’s tough musical comrades have been thoroughly enjoying themselves: there are adventurous interpretations of works by Rammstein, Frank Zappa, ABBA, and Klaus Doldinger’s Passport (the seasoned saxophone master himself even throws in a solo), along with original Panzerballett compositions.

The Munich guitarist once again shows that he is able to take elements which seemingly shouldn’t fit together and somehow make them work, and to integrate it into his own awesome world of sound. Ralph Siegel’s Ein bisschen Frieden travels quite possibly the furthest distance to finally arrive at the explosive electric guitar, freely improvised solos and the driving density and exhilarating acceleration of Panzerballett’s motifs.

Zehrfeld’s “dance partners” in Panzerballett are guitarist Martin Mayrhofer, saxophonists Alexander Hagke and Gregor Bürger, bassist Heiko Jung, and drummer Sebastian Lanser. The bandleader stayed away from doing his own compositions on purpose, and instead put his colleagues in the foreground. Thus Martin Mayrhofer has front stage on Bird Wild Web. Likewise his friend drummer Andy Lind who was already part of the party on Starke Stücke, takes centre stage as a composer in Weary Eyes. The Cypriot guitarist Okan Ersan jumps in as guest and his composition Mediterranean Breeze creates a strong contrast between its thoroughly Mediterranean flair with an uneven metric feeling.
Panzerballett has accomplished a lot on this CD, not just through its choice of repertoire, but musically as well. As Zehrfeld puts it, “Above all, we wanted to bring in more vocals with different tunes that shape a variety of atmospheres. On Hart Genossen von ABBA bis Zappa you can listen to the vocals of Conny Kreitmeier – sometimes typically soulful, sometimes strongly reminiscent of Nina Hagen (Mein Teil) – as well as to Andy Lind’s voice which escalates from spare lines to shrieking gothic. And then there is Martin Mayrhofer’s pathetic retro-“progressive rock” vocalizing on Oh No, not to mention the most diverse entries of a background choir.

A further approach was to play with the completely different styles already to be found within the songs. Virtually every number contains some amazing moments that take your breath away, like when Rammstein’s harsh marching beat is suddenly confronted with South American rhythms, or when the aggressive drum onslaught and earthy guitar riffs that give “Jadoo” its coarse edge are seemingly arbitrarily interrupted by a classically swinging bridge. Or when a delicate guitar riff comes in unexpectedly during the refrain of what is an otherwise rapidly accelerating “Gimme Gimme Gimme”. These juxtapositions have a delightful and very deliberate side effect: an air of parody throughout the entire album that occasionally gives way to a more obviously humorous tone.

Hart Genossen von ABBA bis Zappa is a musical roller coaster ride that will jostle your listening habits. Put on the CD, fasten your seat belts, and hang on! Chaotic and euphoric at the same time, we can hardly wait to see where Panzerballett’s next excursion will take us.