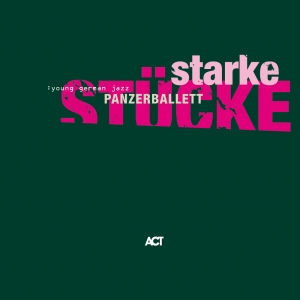 Offhand it seems foolish to combine, of all things, jazz and heavy metal. But Jan Zehrfeld, the compositional mastermind of Panzerballett, belongs to the generation of musicians now forcing themselves into the spotlight who grew up breathing in more than one musical style. The combination of jazz-inspired improvisation with headbanging heaviness and ingenious intricacy are musical combinations that, at least in Germany, are seldom heard; over the nearly four years of its existence, Panzerballett has attempted to “combine the floating suppleness of ballet with the crash-bang power of a tank,” as Zehrfeld phrased it.

But in order to interlock the brachial riffs and driving grooves with complex solos and winding, edgy rhythms it is necessary to have like-minded virtuoso players on every instrument. Panzerballett had already shown they were well on their way with their self-titled debut album two years ago. For instance, bassist Florian Schmidt had learned to deal with pressure and tempo through his work with Pee Wee Ellis. And with his band Earforce, saxophonist Gregor Bürger has become conspicuous as someone who is brilliant at breaking down barriers. In the meantime, the band has added a second guitarist, Andreas Dombert, and drummer Sebastian Lanser – a colleague from Bürger’s days at the Linz conservatory in Austria – has tumbled into the mix. This gives Panzerballett the ability to expand and shift into an even harder drive.

For his ACT debut Starke Stücke (a play on words which means “Heavy Pieces” or “Strong Stuff”) Zehrfeld concentrated on Siggi Loch’s incitement to tackle not only his own original compositions, but take a risk by adding both rock and jazz standards to the mix for the first time. So we get Henry Mancini’s Pink Panther, the Deep Purple hit Smoke On The Water, Thunderstruck from AC/DC or Paranoid of the heavy metal band Black Sabbath. Joe Zawinul’s Birdland is artfully dismembered and then reassembled into something completely new. Zehrfeld performs the same operation with the Scorpions’ Wind Of Change. He comments: “For me it was a snap decision. So that we could all the more mercilessly tear them apart, I chose really well-known pieces. It’s more exciting for us as well as the listener.”

Not only stylistically, but also personally, Starke Stücke is filled with fascinating, iridescent, occasionally humorous combinations. The impressive guest list of players on this new sound pallet includes guitarists Peter O’Mara, Nguyên Lê, and Ulf Wakenius, saxophonist Alexander von Hagke, keyboard player Jan Vacik, Andy Lind, Naomi Isaacs, and singer Conny Kreitmeier, who not only has a successful career belting out rock songs – she has also received the German “Kleinkunst” prize. More than ever, the motto “head banging with brains” holds true for this Panzerballett.