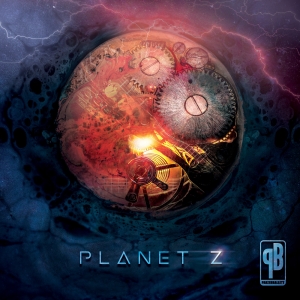 Music mastermind Jan Zehrfeld certainly does not shy away from difficult musical experiments. This has always been a fundamental principle of Panzerballett. After the success of the last album X-Mas Death Jazz, one was left wondering if it could possibly be topped and justly so. The extremely talented drummer Sebastian Lanser had set the bar very high with his intricate drum arrangements. That being said, Jan Zehrfeld came up with a new and crazy plan: to bring together and collaborate with not just one, but with several best of the best drummers on the following album. The surprises and reinvention of Zehrfeld do not end there: in addition to composing and recording his own pieces, Jan also recorded custom-made works of highly esteemed composers – doing so in the upmost level of perfection. A handful of world-class drummers from the circle of prog, metal, jazz and fusion legends such as Frank Zappa, Devin Townsend, Meshuggah and Allan Holdsworth are all performing on Planet Z. Jan Zehrfeld succeeds in combining rhythmic lunacy and compositional shamelessness in one “unheard of” album. What Jan “Z” does together with drummers Marco Minnemann, Virgil Donati (Planet X), Grammy Award winner Morgan Ågren – ennobled by Zappa, Gergo Borlai (Tribal Tech) as well as regional representatives Hannes Grossmann (Alkaloid, Blotted Science) and Andy Lind on Planet Z once again pushes boundaries and makes the impossible possible.